Seasoned Chef Gets His Start at Ulster BOCES 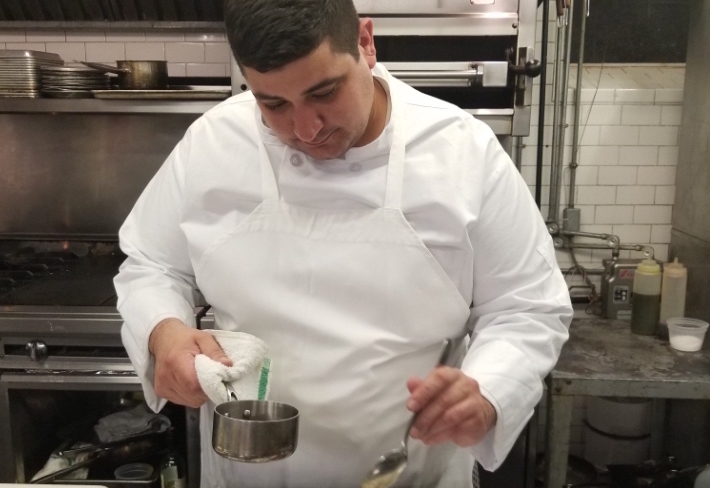 Seasoned Chef Gets His Start at Ulster BOCES
Nov 13 2019

Ulster BOCES means different things to different people. For Taven Barrera, it was the starting point of a rewarding career in culinary arts.

Taven, a 2005 Highland High School graduate, recalls that one of his middle school teachers graduated from the Aviation program at the Ulster BOCES Career & Technical Center and spoke positively about the education he received there. The teacher’s influence made Taven consider enrolling in the same program. After meeting with his guidance counselor, however, he decided to enroll in the Graphic Visual Arts program instead. He quickly realized that it wasn’t the career path he wanted to pursue and he made the switch to Culinary Arts.

“My father was a chef, so it was familiar,” he says, explaining that he has always been interested in food. “When I was a kid, I would watch the Food Network instead of cartoons and I had been working in a pizzeria since my freshman year of high school.”

Taven remembers being socially active and involved in sports at his home school, but he admits he wasn’t engaged in the traditional school setting or strong in academics. “At BOCES, being able to get up and move around and having industry-related demonstrations worked for me,” he says, adding it was an incentive for him to meet the program requirements, which also included a lot of bookwork.

He believes that his experience working in the food industry at a young age helped him excel in the program. He remembers his class learning how to use a commercial can opener—a skill he already possessed because of his job in a pizzeria. “If you show me something once, you’ll never have to show me again,” he says.

Taven’s two years at Ulster BOCES paid off. He went on to pursue his culinary arts education at Johnson & Wales University. “I always had a passion for food and I was doing well [at Ulster BOCES], so it made the most sense,” he says.

It was in college that Taven realized his Career & Technical education had provided him with industry experience that many of his classmates did not yet have. “I was never great in school, but I think having that experience on my application was why I was accepted [into Johnson & Wales] and it put me ahead of other students in college,” he says.

Taven has maintained his relationship with his former teacher and mentor, Chef Victor Arnao. He remembers feeling that Arnao saw potential in him and pushed him to use his talents. “We were making a frittata with Chef Arnao and one student stepped up and volunteered,” recalls Taven. “Afterward he asked me why I didn’t volunteer. It made me feel like he took notice of me in a way that a lot of teachers never did. I think that’s why I went to Johnson & Wales because that’s the school that he went to.”

After graduating from college with a bachelor’s degree in culinary arts, Taven took on a series of positions including a sauté chef at Hotel Tivoli before landing his current job as a sous chef at Gedney Farm, a restaurant and wedding venue in Massachusetts. “You have to love it or you wouldn’t stick with it,” he says about working in the food industry. “It’s long hours for six or seven days a week and no less than eight hours, but more like 10 or 11. I went to a Career Day at Highland Middle School and they [the students] asked how many hours a week I work. I told them like 60,” he laughs.

While he enjoys working at Gedney Farm and prides himself on learning something from each of the various jobs he’s worked at, Taven says he would ultimately like to add the title of teacher to his resume. “My goal has been to end up as an educator—teaching the next generation,” he says, adding that perhaps he will make his way back to Ulster BOCES one day as an instructor. “It was the foundation and the starting point of my career,” he says.