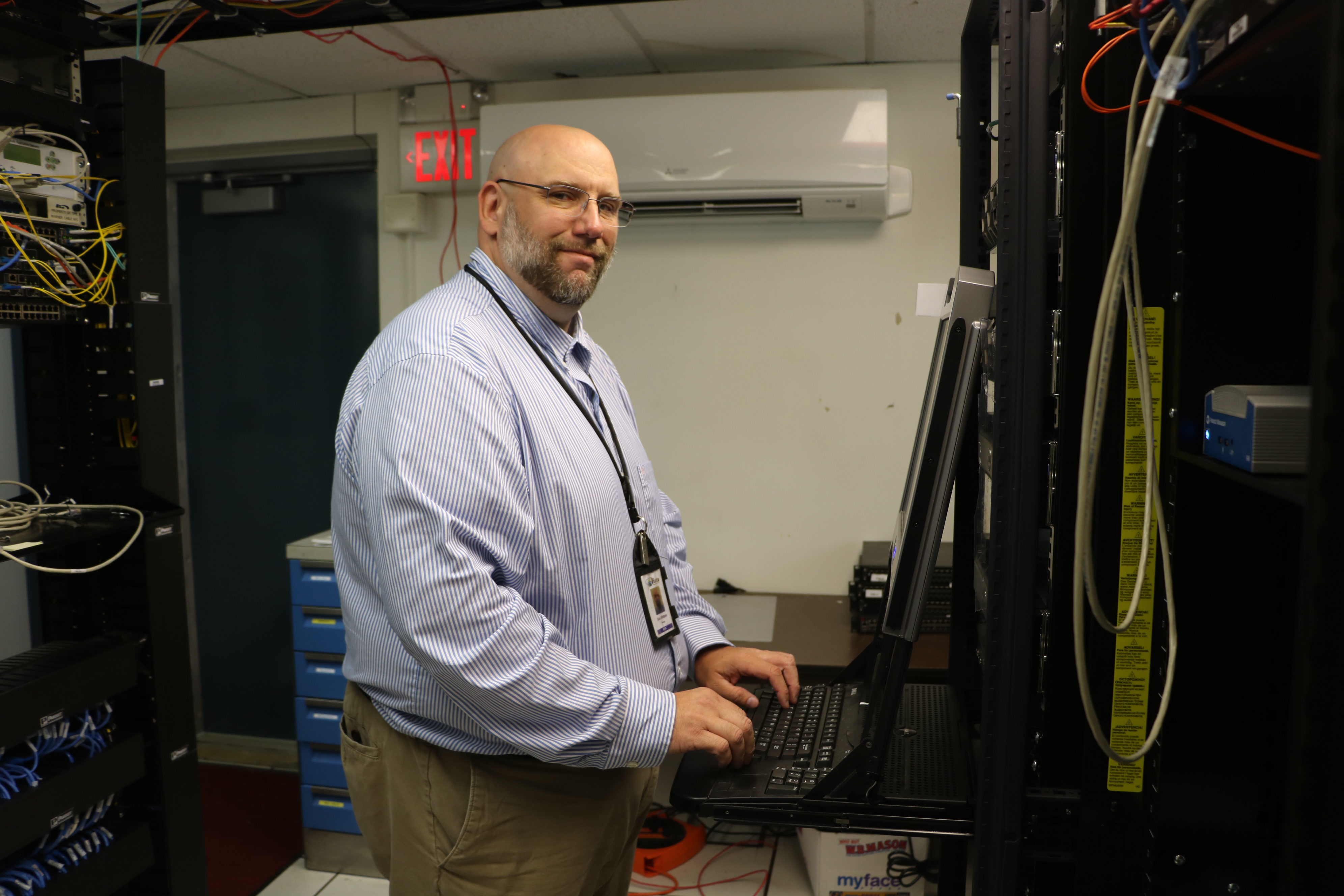 Ulster BOCES means different things to different people. For Silas Whittaker Jr. it was a place he could thrive academically during a trying time in his life, and then it became his professional life.

Silas dropped out of Kingston High School in the early ‘90s to help support his family when his father became ill. “When my father became ill he was no longer able to work in heavy construction,” explained Silas, the new operations and programming manager at the Mid-Hudson Regional Information Center (MHRIC). “That meant the part-time farm I was growing up on would have to become a full-time farm. The right thing to do was drop out of high school during my freshman year to ensure we had a stable home.”

Upon returning to school a year later, Silas enrolled in the Ulster BOCES Alternative School to catch up on his studies. It was there, volunteering to clean computer screens in the computer lab, that he was exposed to technology and given the freedom to flourish.

“When my father was no longer able to work, we suffered,” Silas recalled. “I wanted the largest skillset possible because I never wanted to be without a job. The staff at Ulster BOCES allowed me to carve my own path. I loved solving problems others couldn’t. My natural ability was allowed to blossom. That probably wouldn’t have happened any place else.”

He also earned money at the Port Ewen campus as a part-time student worker in desktop and network support, and at the New Paltz campus doing Community Relations. Ulster BOCES enabled Silas to receive the education he wanted while earning an income.

“Dropping out of high school was a tough pill to swallow and certainly made things difficult for a period of time, but eventually it exposed me to the world of technology and I couldn’t get enough of it,” Silas said.

Upon graduating from Kingston High School in 1996, Silas worked full-time in network support at Ulster BOCES while studying micro-computers for business at SUNY Ulster at night. When he didn’t have class, he worked nights as a programmer for Mid-Hudson Micrographics in Port Ewen.

“When I was hired full-time at Ulster BOCES out of high school, I worked with the special and alternative education population and the therapists providing adaptive technology to kids who had severely limited motor skills and communication skills,” he recalled. “I saw the value technology could bring to someone’s life on the most basic level and how it meant the world to them to communicate with the people around them when they previously had not been able to.”

Other than from 2005 to 2010 when he took a technology position at a local savings bank, Silas has called Ulster BOCES home. Today, he manages the technical support team that is responsible for the day-to-day operations of the MHRIC data center.

“Our team deals with back-end support for our 47 component school districts across four counties,” he said. “That means the financial systems for the districts, the student management systems dealing with time and attendance, report cards, progress notes, Individualized Education Programs, and so on. We make sure those systems are constantly running, updated, and secure. What we do here on the back end enables teachers and instructional staff to do what’s most important on the front end, which is spending more time working with kids.” Silas also manages the MHRIC’s four couriers and production print shop.

Away from the office, Silas and his wife are raising their children on the family farm. “I knew how much the farm meant to my father and I was going to do everything I could to make sure it stayed with us, ” he said.

“Had I not dropped out and then gone to the Alternative School, I may not be here today. I truly believe everything happens for a reason,” he says.