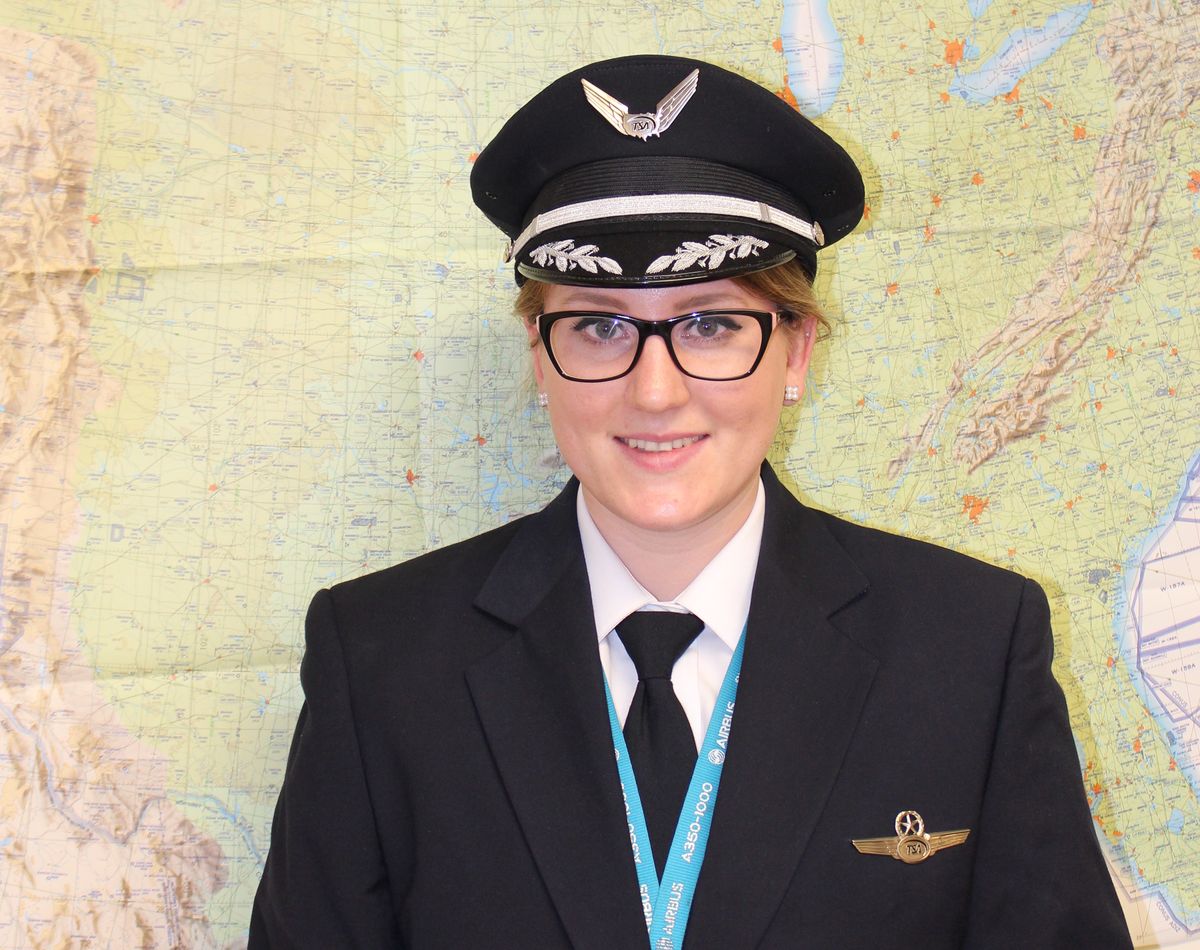 Ulster BOCES means different things to different people. For Katja Jourdan, her time spent in the Career & Technical Center's Aviation program charted her course in the aviation industry, where she has landed her dream job as a captain for Trans States Airlines. The 2011 Rondout Valley High School graduate credits her achievement to the rigorous instruction she received at Ulster BOCES.

In October, Katja—who recently completed the necessary training to upgrade to captain —returned to the Ulster BOCES Career & Technical Center to share words of wisdom about her journey in the industry with current Aviation students. She reminded them that although the program is hard work, it is all worth it.

"BOCES set the tone for my career. I would not be where I am if not for BOCES," says Katja. "It was a life changer."

She recalls that her passion for flying began after watching Fighter Pilot: Operation Red Flag at an IMAX theater during spring vacation of her sophomore year. The movie was one of two being featured (the other was Wall-E), but her parents encouraged her to watch the pilot movie. The film was about an Air Force pilot in training and featured simulated flight scenes of speeds up to 800 miles per hour, along with impressive sounds and aerobatics.

By the end of the movie, Katja was hooked. "I was amazed by the view from the cockpit and I thought, 'I need to figure out a way to get in the cockpit of a plane, whether through the military or by civilian means,'" she remembers.

The answer to this dream was the Ulster BOCES Aviation program, a two-year, half-day intensive career training program that enables students to qualify for their Federal Aviation Administration (FAA) private pilot's license examination. The program is offered to students at no charge through a cooperative agreement with Ulster BOCES.

After beginning the program, Katja was pleased with how quickly she was able to make her way into the cockpit of an airplane at the Kingston-Ulster Airport. "Shortly after my first flight I realized I was on my career path and thought, 'How can I expedite this process and get working on my career?'" Katja says.

Katja credits her former Ulster BOCES instructor April Albanese with helping her put together a plan to finish the two-year program in just one year, an ambitious and non-typical path for completion. "I got my (private) pilot's license right around graduation," she says.

Katja says the rigorous coursework and intense workload at Ulster BOCES put her ahead of most of her class at Jacksonville University, where she earned a bachelor's degree in Aviation Management and Flight Operations. Since she had already received credit for obtaining her pilot's license in high school, she was able to start her instrument training while most of the other college students were still working on getting their licenses.

As a college student, Katja continued to work hard to advance her future profession by taking full course loads each semester and accepting several part-time jobs on campus.

Her commitment and dedication has paid off. As a captain, Katja now has the highest pilot certification available for a large commercial aircraft and she is part of a small demographic of women in the industry. In fact, according to Women in Aviation International, a nonprofit organization dedicated to the encouragement and advancement of women in all aviation career fields and interests, women represent just six percent of the total pilot population.

As a captain for Trans States Airlines, based in St. Louis, Missouri, Katja's workday responsibilities vary. Aside from a non-traditional work schedule made up of approximately three or four days working and three or four days off, she often wakes up in hotel rooms and instead of "staff meetings" she's engaged in flight plans, security checks, flight data analysis, briefings, and aircraft checks. Once a flight lands, responsibilities include completing the flight log, securing the aircraft, and making sure the cabin is ready for the next flight. Katja says most importantly though, is that she is now considered the Pilot in Command, meaning everyone reports to her and she is ultimately responsible for each flight to end safely.

Although Katja admits the job comes with a lot of accountability, she says, "I really enjoy it. I get to go to some cool places."