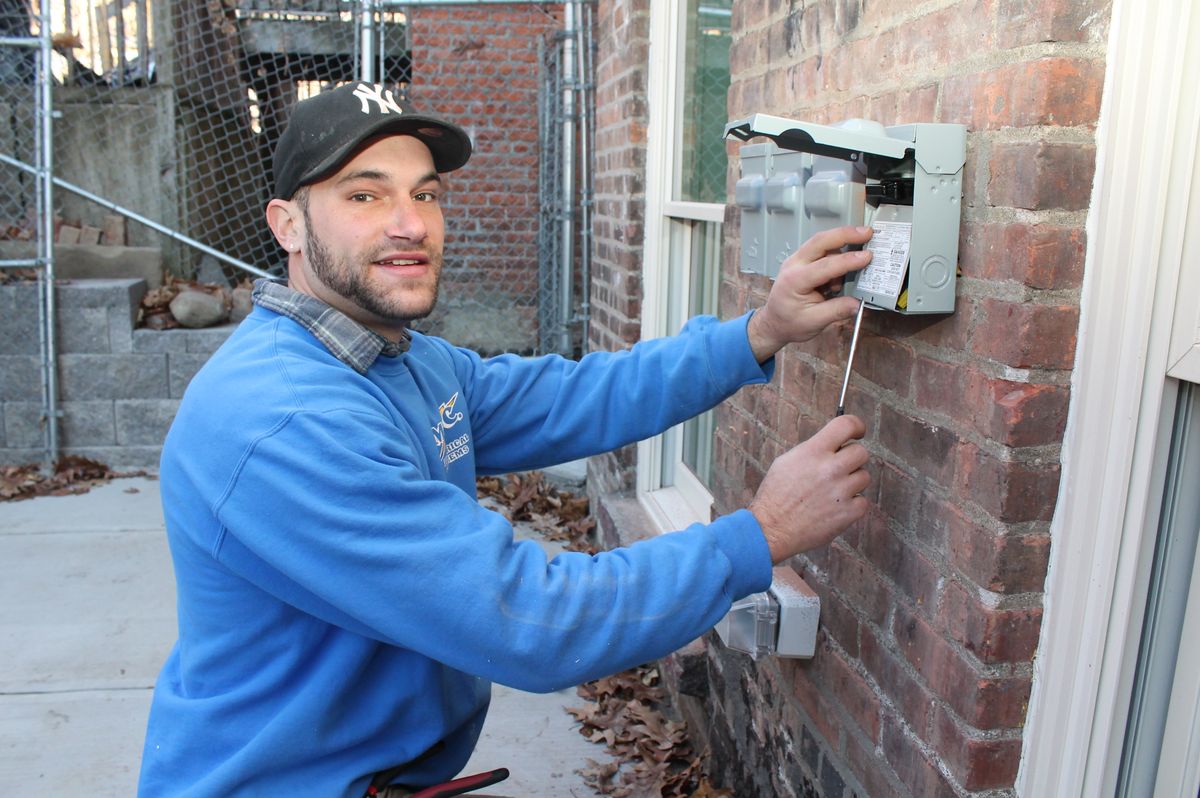 Ulster BOCES means different things to different people. For Chris Chateau, the Ulster BOCES Career & Technical Center was a career-focused learning environment that provided him with a way to turn his love of working with his hands into earning a secure income in the electrical construction profession.

While in high school, Chis earned good grades and graduated at the top of his class at Wallkill High School (Class of 2006). But Chris also recognized his aptitude for hands-on learning and appreciated learning from a teacher who was a master in his trade. "I loved my [Ulster BOCES] teacher, Mr. [James] Countryman," reflects Chris. "He's a legend and was a cool guy to go to school with for two years. I learned a lot from him."

Chris became interested in the Ulster BOCES Electrical Construction & Maintenance program during a high school visitation day to the Career & Technical Center. An annual field trip, the event allows Ulster County students to explore the classrooms and labs of two programs, speaking with instructors and students. Chris elected to visit Motorcycle/Outdoor Power/Turf Management and Electrical Construction & Maintenance. He made his decision to enroll in the electric program based on a conversation with his uncle, who is an electrician and owns a local business.

Chris remembers that he really enjoyed the hands-on, task-oriented method of instruction. "When you're going through high school, you have different classes and then you go to BOCES and you get to meet people from different schools and you get to learn in a whole different way," he says.

From learning to install, maintain, and repair electrical wiring, to class trips where the students were able to work on wiring for a Habitat For Humanity project, Chris felt he had found his career niche.

"It was a pleasure to have Chris. He was very motivated," says his former instructor James Countryman. "He was a go-getter and had a vision for his future and that showed in his performance in class."

Countryman's confidence in Chris was accurate. After graduation, Chris earned a $500 scholarship and enrolled in SUNY Ulster's Engineering Science: Electrical Engineering Concentration program, but after two semesters he found it wasn't the right fit for him. He then worked in the restaurant industry temporarily before returning to the Ulster BOCES Adult Career Education Center to further his electric program education. Here he continued his occupational trek to become a licensed journeyman by enrolling in the New York State Registered Electrical Apprentice Program. The course allowed him to continue to earn a living while perfecting his real-world work skills.

Because of his former high school program, Chris was awarded credit for one year of the five-year adult program, recalls Chris. He admits that going back to school and holding a job is a balancing act. "It's a big commitment. After working all day in the cold and climbing up ladders, then going back [to school] for two days a week for three hours at a time, well it's a challenge."

Today he is a foreman at MC Superior Electrical Systems based in Wallkill. His job takes him throughout the Hudson Valley where he oversees large residential and commercial construction projects and collaborates with other trade professionals including HVAC, plumbing, and excavating foremen.

Local work has been plentiful in the construction trade. According to the New York State Department of Labor's "Significant Industries Report, Hudson Valley 2015," growth in construction has rebounded nicely after the collapse of the housing market and Chris can attest to this as he oversees and works at multiple sites in Orange and Westchester counties.

According to Chris, a typical day is never a typical day, and that's a good fit for him. "I like my job because it changes and I like having the responsibility," he says. Some of the duties he performs including ordering parts and equipment such as wires, connectors, and pipes, as well as performing tasks such as running feeder wires and installing fire alarms and security systems.

His preferred responsibility is all encompassing though. "My favorite part of the job?" muses Chris, "Well, I really like the whole thing. I like wiring it and then seeing it all come together."